How a microphone saved Christmas

The TeamConnect Ceiling microphone is the best Sennheiser product to meet the changing requirements of meeting and conferencing demands. It ensures crystal-clear sound for all participants and complete freedom of movement in the conference and seminar rooms themselves. But who says that this product is used only in companies and at universities? By chance, we came across the following story:

How a microphone saved Christmas

In a little village, far, far away from the villages we know, there lives a small group of elves. But these are no ordinary elves. These are Santa’s special little helpers – the wish elves. No taller than a garden gnome, with a pointy red hat, they have what is probably the most important job you can imagine: to collect the wish lists of children from all over the world and then hurry back to the North Pole in time for Christmas to hand them over to Santa Claus and his workshop elves. Having arrived, they sit down with a nice cup of tea and a mince pie and think about how they can make all the different wishes come true. After all, children not only put toys on their wish list. They sometimes ask Santa for a lot of other, really important things like ‘more courage’ or ‘a good friend’ – and these wishes need to come true too. 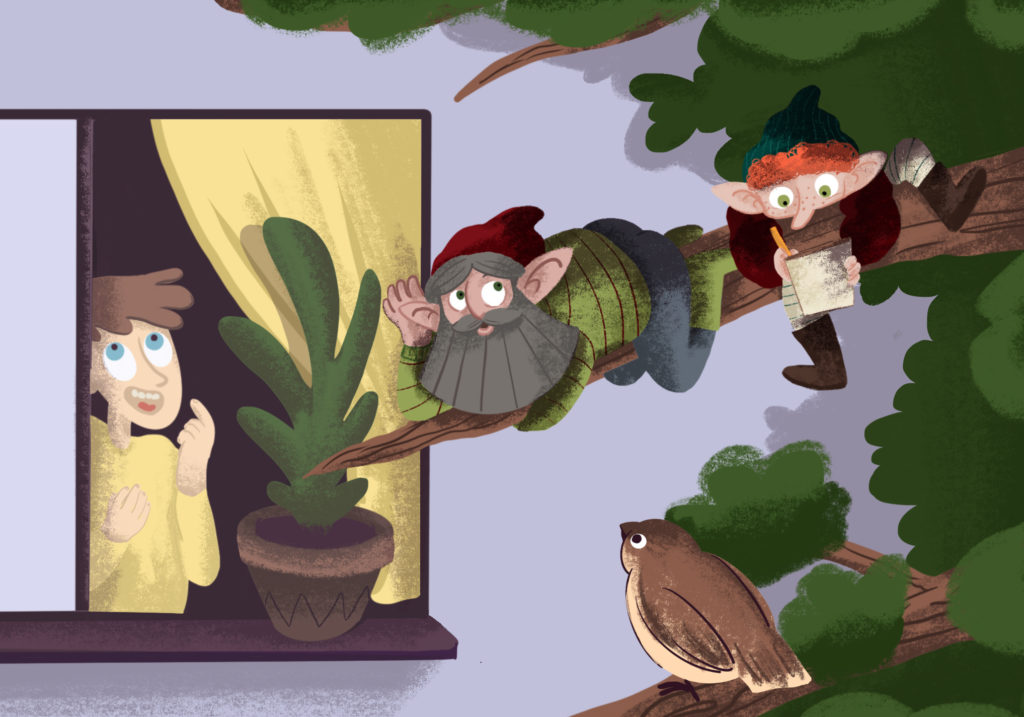 Now you might be forgiven for thinking that wish elves are only really busy at Christmas and have nothing to do for the rest of the year. But that’s not entirely true. All year round, they are hard at work pressing their small, pointy ears to children’s bedroom windows, waiting for the little ones to let them know what they want most of all for Christmas. Apart from the wishes on their list, there are also the many big and small wishes that they have forgotten about over the past year, or ones that they don’t dare to write down. But we can all imagine the surprise and joy on a child’s face when one of these forgotten dreams really does come true on Christmas Day.

This year too, the wish elves have been as busy as ever collecting all the children’s lists, and their list of forgotten wishes has also got longer and longer. Then, just like every year, the ten elves harness their eight reindeer and load their large wooden sleigh with provisions for the journey and their sacks full of children’s wish lists, ready to set off for the North Pole. 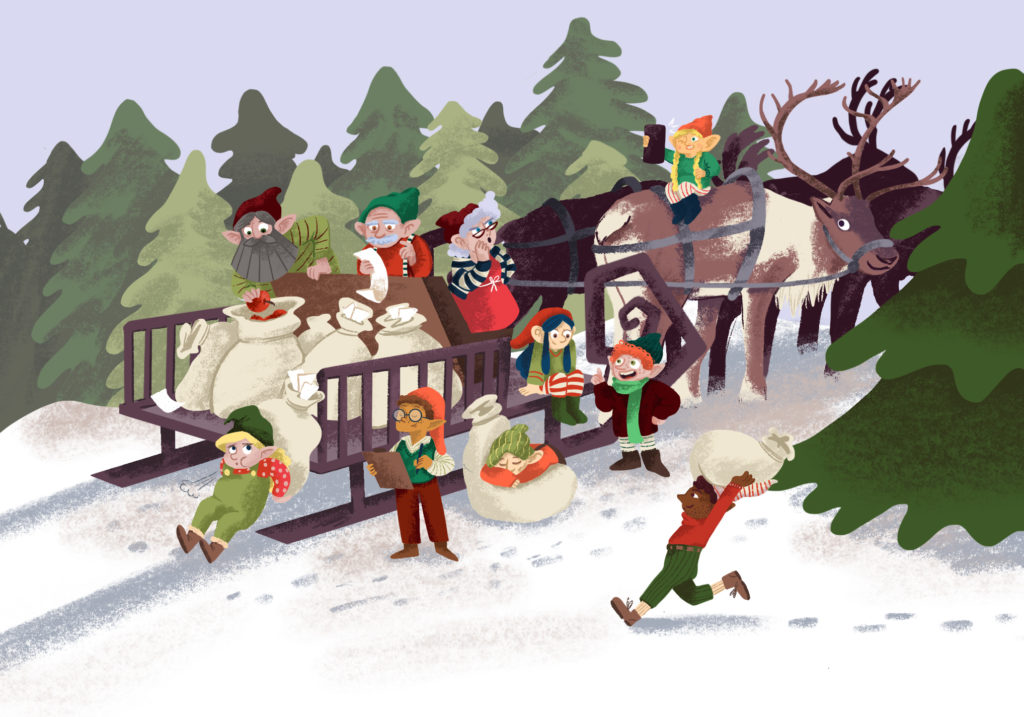 After all this time away, they are so looking forward to seeing Santa Claus and the workshop elves again. But, just as the reindeer are about to leap into the air, it happens: the heavy wooden sleigh bounces over a big, sharp stone (one that surely wasn’t there yesterday, was it?) and rolls over onto its side, shedding half of its load on the way. What a shock! Fortunately, all the elves and reindeer are unscathed. But their poor sleigh hasn’t been so lucky. The right-hand runner has been snapped in two. Still shaking, the elves scurry around the sleigh and manage to pull it upright again, but it soon becomes clear that their beloved means of transport has been damaged beyond repair. How on earth can they get to the North Pole now without their sleigh? Just imagine what the poor children would say if Christmas had to be cancelled this year! 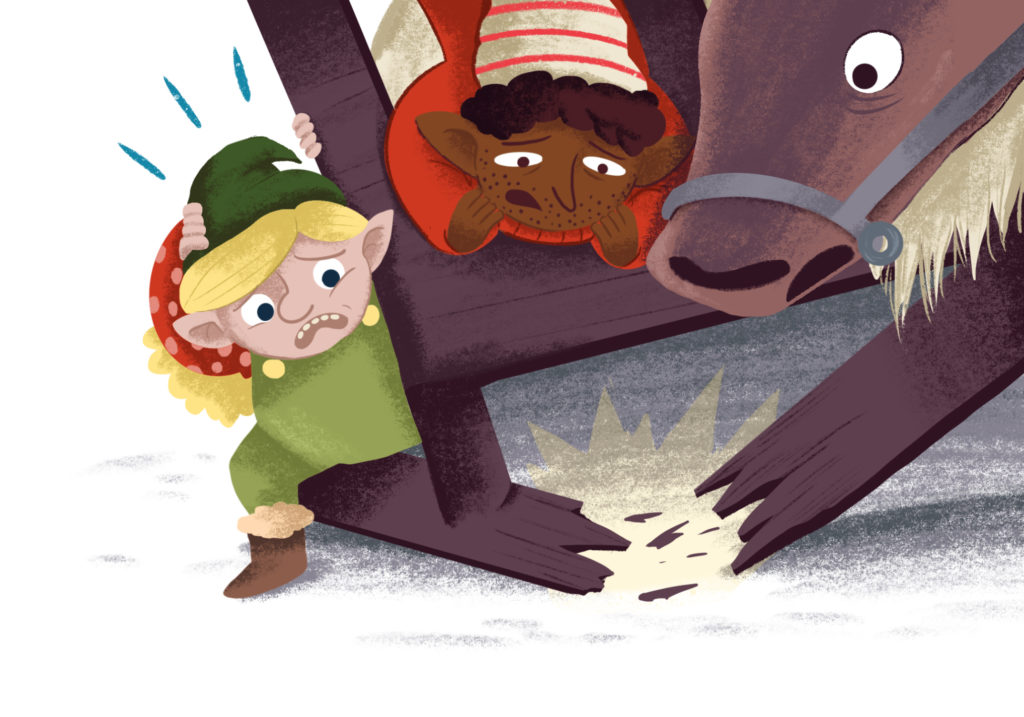 Suddenly, one of the Christmas elves has an idea! They can call Santa and read out the wish lists to him over the phone. All the elves hurry into the kitchen and gather round the little elf mobile phone. Santa’s phone rings and he answers immediately, but even though the phone has a loudspeaker, they can hardly understand a single word he says, and the display is so tiny that they can just about make out the shape of Santa’s white beard. And there’s no chance at all of recognising even a single workshop elf. 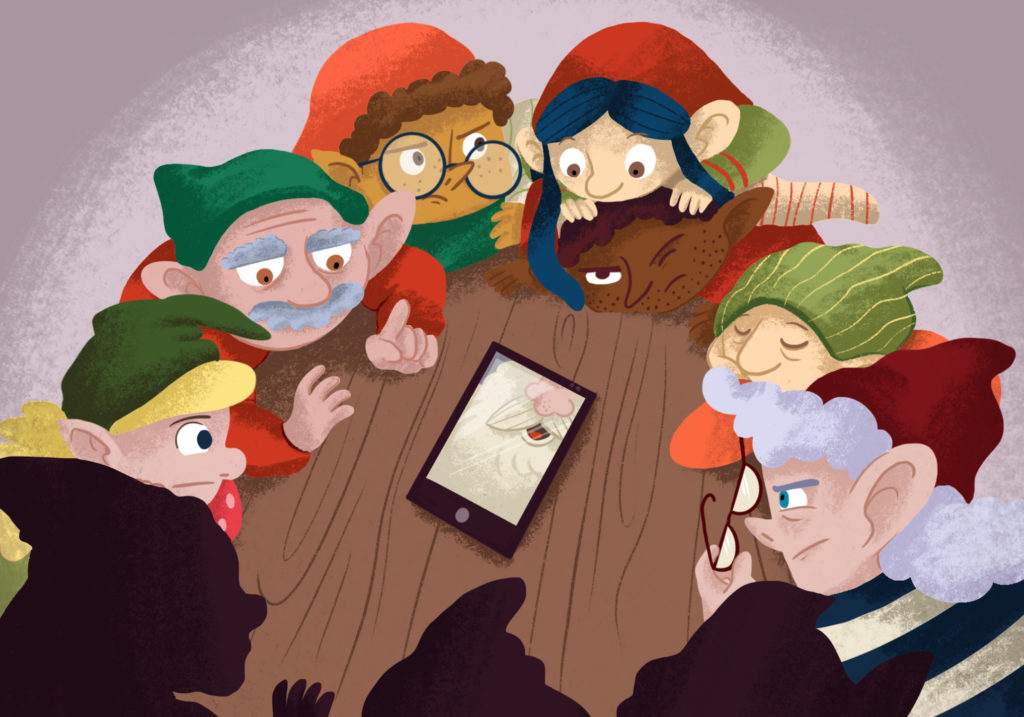 That’s no good at all, the elves grumble. How on earth are they going to sort out the children’s wishes now? They need another solution. And quickly.

The elves are at a loss, but Santa has a brilliant idea. He has a good friend who is a huge fan of every kind of technical wizardry, and he recently told him about an amazing piece of new technology that lets people talk to each other and to see each other without being in the same place. The elves frown: so how’s that supposed to work? And Santa is not entirely convinced either, but as no-one else has a better idea, he decides to call his old friend and ask for help. It doesn’t take long before Santa’s friend, who lives quite near the little elf village, agrees to equip the elves with the new technology. 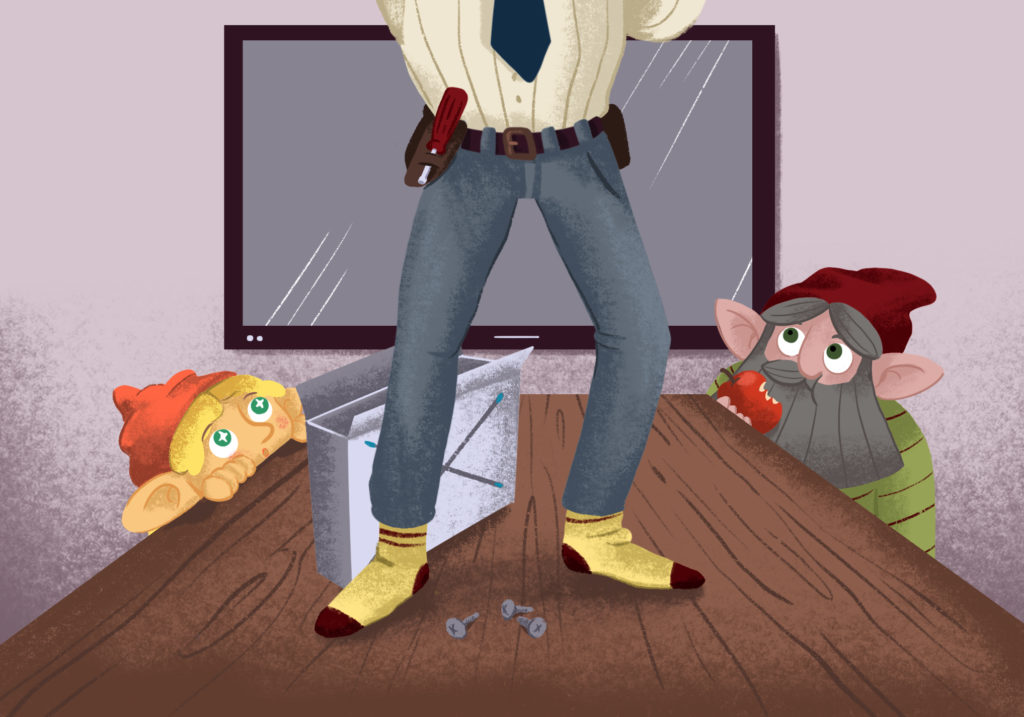 The elves are very sceptical at first, because they’ve always done things their own way for years. But they have no choice, and so, a little grudgingly, they clear the kitchen table to let Santa’s friend, the mysteriously named Mr I.T., set up his magical equipment as quickly as possible. At the end of the table, he places a large screen that has a small camera attached to it. The elves are unimpressed: so what’s so special about that? They’ve seen things like that before on television. Mr I.T. smiles and unpacks a white, square-shaped device which he proceeds to fix to the kitchen ceiling. The Christmas elves stare on in amazement. An hour later, the white square has been fitted to the ceiling and little blue lights are shining on all four corners. Finished! Mr I.T. is clearly delighted. The conference call with Santa Claus and the workshop elves can now begin. 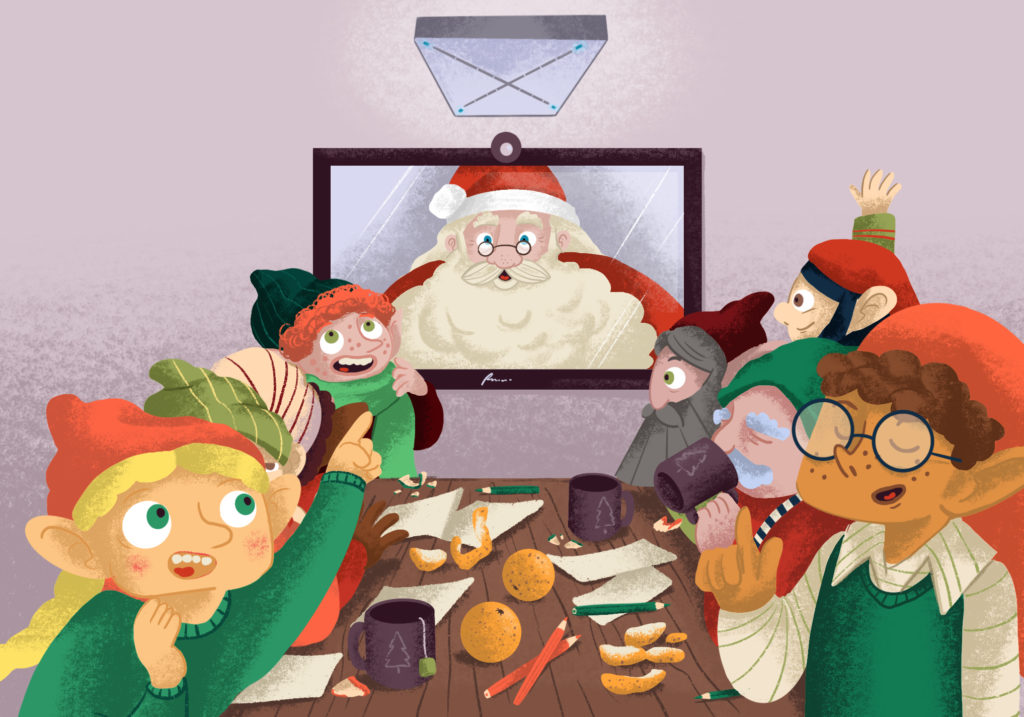 The wish elves are absolutely amazed to see Santa Claus suddenly appear on the big display screen. And not only him – next to him they can see half a dozen workshop elves too! And every detail is as clear as if they were all sitting in the same room. Together, they begin to study the children’s wish lists that the wish elves had sent from the laptop set up by Mr I.T. and which are now being displayed on the big screen in front of Santa and his workshop elves far away at the North Pole. For some of the wishes, they really have to rack their brains and be creative. How useful, therefore, to have a microphone on the ceiling. It means that the elves can spread out around the whole kitchen, scribbling down notes and collecting ideas while still talking to the team at the North Pole at the same time. Santa smiles with satisfaction because, even with all the creative chaos around his own table and in the elves’ kitchen, he can understand every word that is spoken. And as the camera is linked with the microphone on the ceiling, it focuses immediately on the elf who is speaking. Soon, Santa hardly even notices that he is thousands of kilometres away from the wish elves.

Five busy hours later, the Christmas team has finished its work: they have looked at every single wish list in detail and have chosen the perfect wish for every child, which they immediately pass on to the workshop or the “Department for Really Important Wishes”. In the meantime, it is pitch black outside and the elves are certainly relieved that they no longer have to travel all the way home on their sleigh through this cold, dark night. Instead, they all put their feet up in front of the blazing wood stove and enjoy a hot cup of cocoa and some nice mince pies.

Two weeks later, the big day arrives at last: it’s Christmas! And as for the elves, just imagine how pleased they are when they gaze through the windows of the houses and see all the happy children opening their presents under the Christmas tree. Christmas has been saved after all!

The beautiful illustrations to this story were created by illunauten.ch.