London/Wedemark, 27 February 2020 – Keeping tradition alive, Sennheiser has once again raised the bar at the 2020 Brit Awards, with its microphones and IEM systems delivering sensational performances.

Hosted by comedian Jack Whitehall and held at a sold out The O2 Arena in London, this year’s BRIT Awards celebrated its 40th anniversary with an explosion of great acts and performances, solidifying its status as the biggest music awards show in the UK calendar.

Britannia Row Productions, long-time audio provider for the show, yet again supported one of the most anticipated events of the year by providing the requirements for the show’s audio system. The BRITs always presents unique challenges for the audio team lead by Live Sound Supervisor Colin Pink. This year was no exception, with three stages and two separate flown PA systems designed by Brit Row’s Joshua Lloyd. Brit Row deployed 16 channels of Sennheiser Digital 6000 and 40 channels of 2000 series IEMs for all Sennheiser performers and presenters on the night. 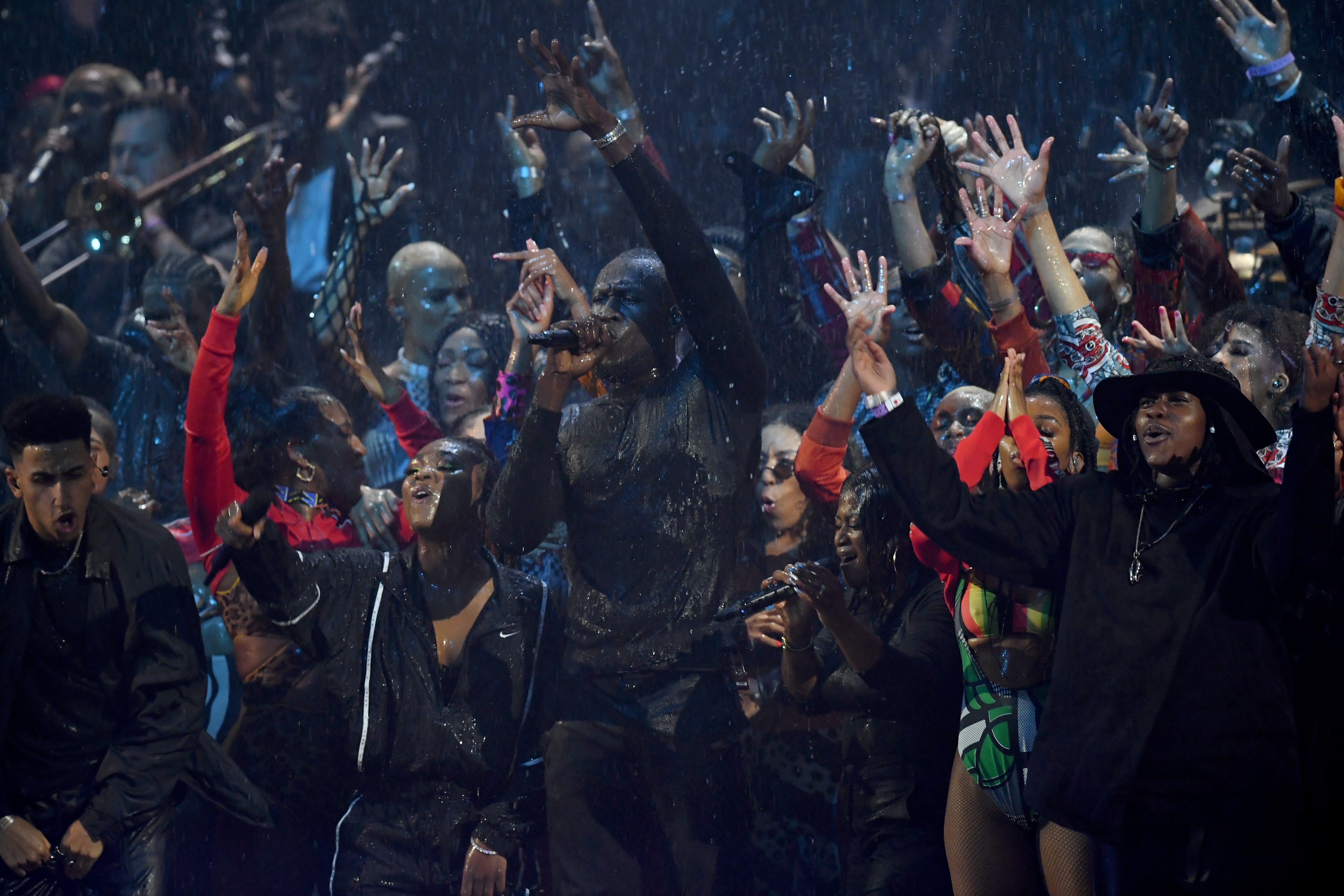 Back in 2018, Stormzy amazed the crowds by giving an epic performance beneath an indoor waterfall effect which soaked both him and his SKM 6000. This year, as if that wasn’t enough, the audience saw the winner of British Male Solo Artist making a triumphant return to the BRITs, performing an epic medley of his hits, including Don’t Forget to Breathe and Rainfall. With the latter, Stormzy was joined by Tiana Major9 and Teni Tinks as well as choir members and dancers, all standing on the stage under a solid wall of rain.

Hearing how Tour Music Live team was speaking about the decision to use the water element on a much bigger scale at this year’s BRIT Awards, Raphael A. Williams, Stormzy’s sound engineer, says that there was never a question about the reliability of such a set up.

“It wasn’t a question this time as we knew what we were doing, so we just wanted to make it happen, and TAWBOX wanted it to be bigger and better,” says Williams. “The first time that we did the waterfall effect in 2018 it was just Stormzy in the rain and then the rest of the production cast and BVs were outside of it. And now this time, the TAWBOX creative team just thought ‘let’s put more people there!’, so we had Stormzy, Tiana and Teni with Sennheiser microphones on stage together with the 60 choir members and 60 dancers.”

“There was a lot of checking and making sure that everything was working,” reminisces Williams. “I remember looking at the microphone after the rehearsals and thinking to myself that it wasn’t really wet, just a little drippy. In rehearsals it was amazing, it would survive all the way through to the end. And during the show, we all jumped up again as it performed flawlessly.”

Williams jokes: “When we looked at the microphone, the mic said ‘Yeah, I am a bit wet, but I am ok. I survived Heavy Is The Head.”

Performing with Stormzy on the night were Burna Boy, Tiana Major9, and Teni Tinks all using SKM 6000 with MD 9235 capsules and 2000 series IEMs. An additional 19 channels of 2000 series IEMs were used for bands and performers with a further three channels for technicians.

“The MD 9235 capsule is unbelievable,” enthuses Williams. “It’s just got that extra sparkle to it. As a dynamic capsule, 9235 is great; you don’t need a condenser capsule to get that sparkle. This dynamic capsule is great for the strong vocal that Stormzy and Burna Boy have, it’s a game changer.”

“It was also technically the first time Burna Boy was on in-ears – normally he does not use in-ears at all, only wedges – but we asked him to try them, as every engineer is different, and we didn’t have any problems. He had got a pack, he has got a good microphone, and he liked it, which is a real plus!” 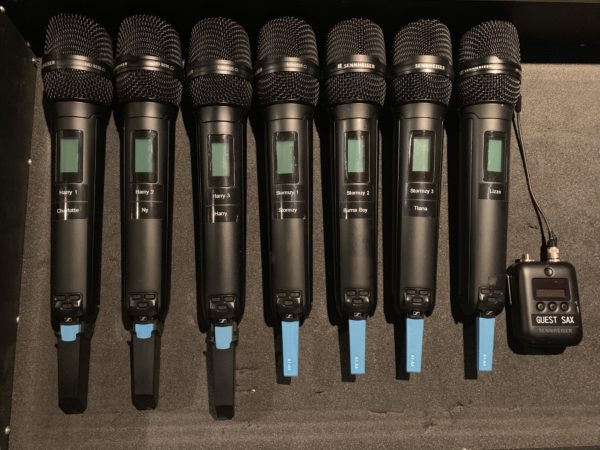 Sennheiser Digital 6000 receivers and transmitters in the backstage area

Other artists using Sennheiser microphones included Mabel, the winner of British Female Solo Artist, who was using a Digital 6000 wireless system for her performance of Don’t Call Me Up. Mabel sang into a Sennheiser HSP 4 headset, transmitted via a Sennheiser SK 6212 mini-bodypack transmitter and received by an EM 6000. One channel of 2000 IEM was used for monitoring.

Harry Styles performed Falling standing on a waterlogged stage and with more water pouring out of a grand piano, as he crooned the ballad into his SKM 6000 with MD 9235 capsule. Monitoring for his three backing vocalists and piano player was done via four channels of 2000 IEMs.

Performing a medley of Juice, Lizzo’s performance on an SKM 6000 and MD 9235 was an injection of pure energy. IEMs were Sennheiser 2000 series for Lizzo and all her dancers.

Closing the show was Rod Stewart performing I Don’t Want to Talk About It, with Ronnie Wood joining Stewart for the next classic Stay With Me, which they delivered together for The Faces with orchestral backup. Wood wore Sennheiser IE 500 PRO IEMs and later commented how much he liked the sound of them.

“What can I say other than a big thank you to Sennheiser for their continued support on the BRITs,” says Britannia Row Director, Lez Dwight. “The two Andys bring a level of comfort to our RF team that is unparalleled.”

Joshua Lloyd, Britannia Row’s Technical Projects Manager, adds, “Sennheiser provides a great service with their tech support at The BRITs. Just knowing that they’re on site adds an extra layer of comfort, which goes a long way on a busy, live show such as this. Andy Lillywhite and the team are more than happy to assist with any and all queries and that really strengthens the wider audio crew.”

“I’ve now been working with the Brit Row team on the BRITs for 18 years and each year the show throws something different at them,” says Andy Lillywhite, Customer Development & Application Engineer at Sennheiser. “This year, for example, there were three separate stages to cover. The presenters’ mics have to work anywhere in the arena as well. Stormzy’s set was another true spectacular. RF is always a challenge in this type of environment and it is an honour to be able to be there and to help Brit Row ensure that everything runs smoothly.”

Andy Egerton, artist relations manager with Sennheiser comments, “It’s always great to support the BRITs and it’s such a long-standing relationship between Sennheiser, BritRow and Colin Pink. With this being Sennheiser 75th anniversary and The BRITs 40th year, it’s a testament to the level of quality all concerned bring to the production.”