Wedemark/Tel Aviv, 23 May 2019 – Israel has been a superb host to the 64th Eurovision Song Contest, with almost 10,000 ESC enthusiasts attending at Tel Aviv Expo, and about 180 million watching the televised live broadcast in the Eurovision countries – reaching as far as Australia. The amount of technical expertise that went into the three shows was outstanding, especially as this year the contest played in two halls. As partner to the rental company Agorà, Sennheiser RF experts were on site to assist with the system planning for wireless microphones and monitors, as well as frequency management and RF monitoring. The system deployed by Agorà and Sennheiser included 140 wireless microphones from Sennheiser’s Digital 6000 and 9000 Series, plus 42 channels of 2000 series IEMs with a total of 196 IEM bodypacks. 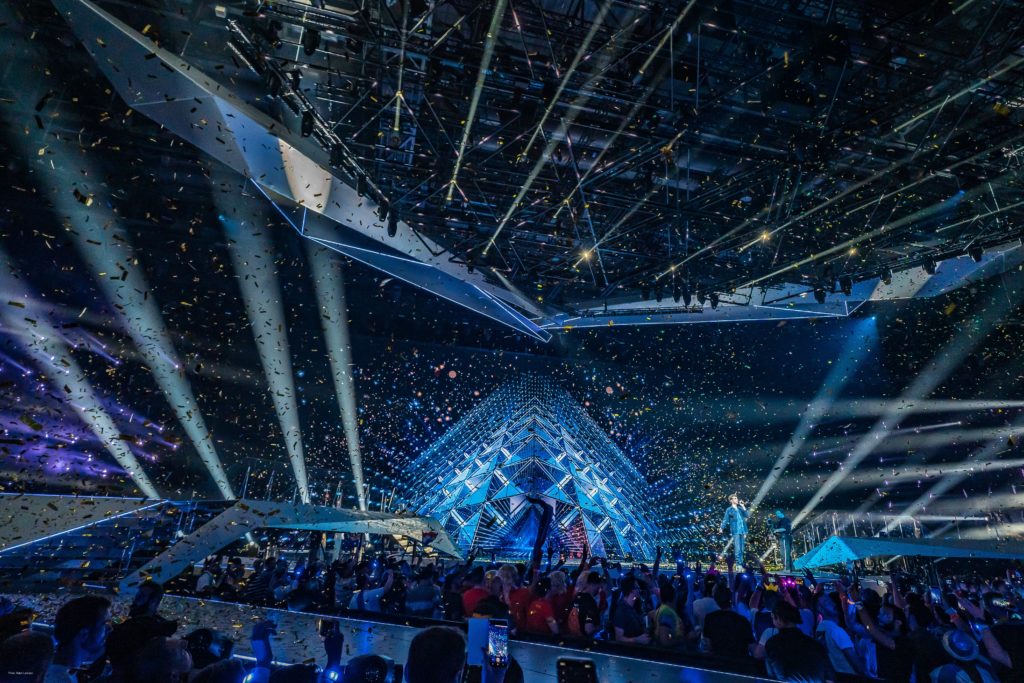 “The main technical challenge for the ESC 2019 was the fact that it took place in two halls, with a third hall of Expo Tel Aviv hosting the press centre,” said Volker Schmitt, Director Customer Development and Application Engineering. “The main hall with the stage and its extraordinary LED wall seated 7,500 spectators. From here, the stage shows were transmitted to a second hall with the Green Room, where another 2,000 audience members watched the live shows via a huge video wall.”

The serious phase of frequency planning for Schmitt and his team began in early March with another round of frequency measurements on site. “We checked occupied frequencies inside and outside of Expo Tel Aviv, and compared the data to earlier measurements in order to have a broad basis for our frequency plan. We found quite a bit of DVB-T activity, but with the frequency efficiency of Digital 6000, we managed to find room for all mics and in-ears,” said Schmitt. “The frequency plan also encompassed the press centre, because we wanted to avoid disturbance if a media team with wireless equipment walked over to the stage hall or the Green Room.” 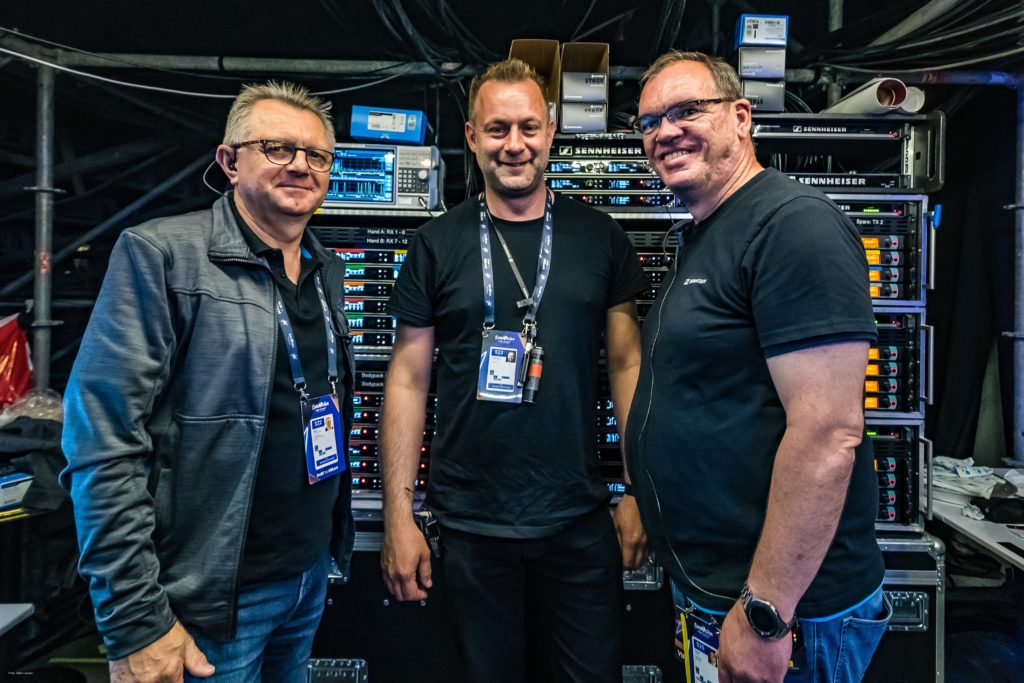 Setting up the system
When installing the RF wireless infrastructure on site, special attention – as always – was paid to the positioning of the receiver and transmitting antennas. Asked about the biggest challenge in this field, Schmitt mentioned the video wall in the Green Room: “Unlike the fantastic stage LED wall, this smaller video wall emitted a lot of RF noise, so special care was required in positioning the antennas to circumvent the disturbances. For the Green Room interviews between artists and hosts, we deployed two A 2003 receiver antennas plus two A 5000-CP for transmitting the monitoring signals.”

“Another challenge that popped up shortly before one of the live shows was the dress that one of the hosts was going to wear,” said Schmitt. “This dress was mainly made of metal threads – underneath it, the transmitter was more or less perfectly shielded! We briefly spoke with production and the dressing team, and convinced them that the transmitter should be worn above the dress. Together, we quickly came up with the idea of a sort of belt for the dress, to which we could attach the two transmitters for the host.” 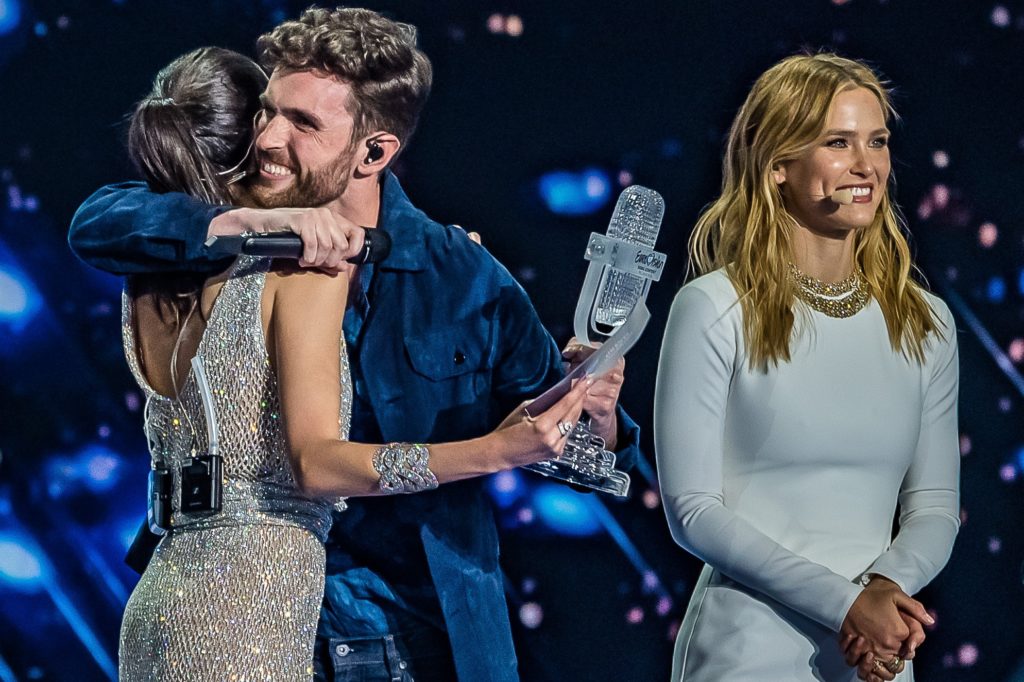 So as not to be shielded by the metal dress, the host’s SK 6000 was attached to a belt that was added especially
(Photo credit: Ralph Larmann)

“When something like this happens shortly before a show, it really gets exciting. Generally speaking, a production should be ‘boring’ for the team on site – because this means that you have done a good job in preparing the event, and that everything was tried and tested and running smoothly before you installed the infrastructure on site.”

Spectrum monitoring
Of course, a frequency plan needs to be closely monitored and protected on site. Despite an armada of warning signs saying that non-approved wireless gear must not be used anywhere on the ESC grounds, a total of 39 unauthorised wireless users were located and “caught” before their gear could disturb any of the dress rehearsals, semi-finals, jury final and or grand finale. 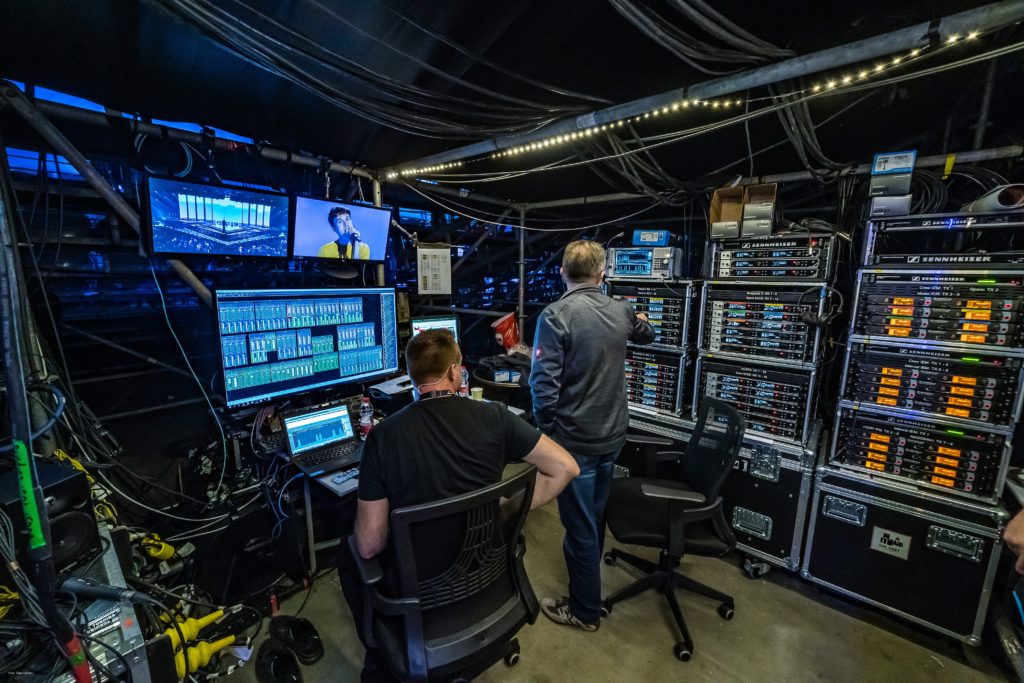 Dare to Dream
For the past few years, the Sennheiser ESC team has made a personal commitment to support charities in the host cities of the Eurovision Song Contest. This year, they were additionally supported by local Sennheiser distributor, Kilim, with the result that their charitable food stand could not only offer the usual great coffee but also some home-baked pastry from the Kilim family. The small food stand was open to the entire production team, who all donated generously to the Ruth Rappaport Children’s Hospital in Rambam. The sum collected – 3,300 shekel – will be tripled by the Sennheiser ESC team and by Kilim. In addition, four hospitalized children accompanied by their parents were invited to the first semi-final and a once-in-a-lifetime experience behind the scenes of the Eurovision Song Contest. 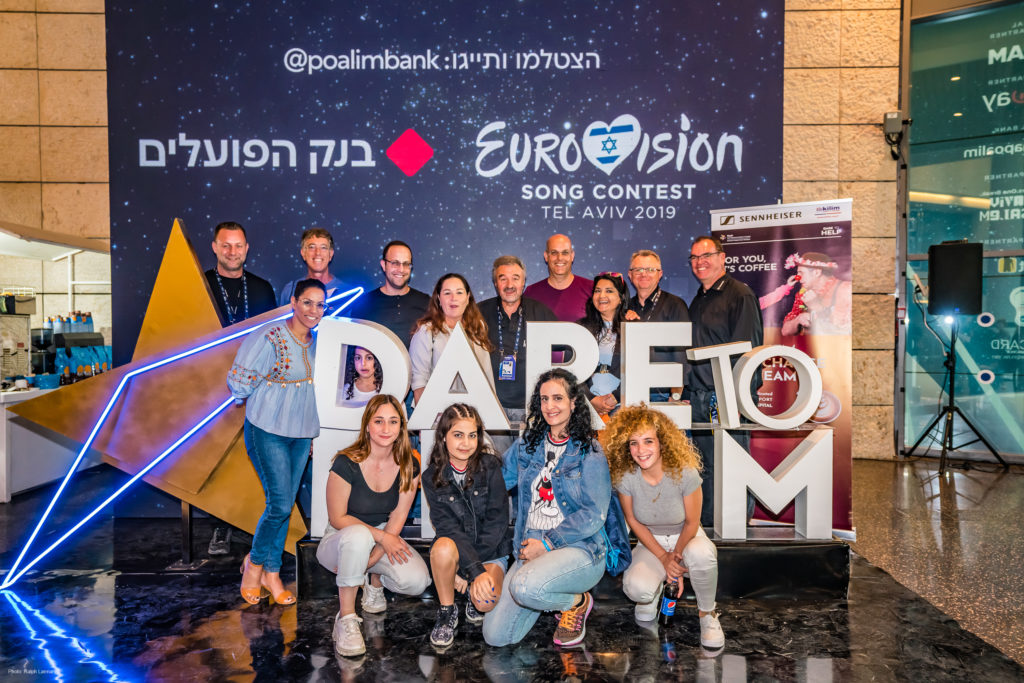 Show extras
While the Sennheiser wireless system for the stage and the Green Room was supplied by Agorà and the press centre system by Kilim, the Sennheiser ESC team brought some last-minute extras with them to cater for special requests. “We had specially-made headsets for the lady hosts, who also got IE 500 PRO in-ear phones instead of the standard IE 40 PROs. Another extra option on hand was a pair of SKM 9000 for the Russian participants, who needed silver microphones. For the same reason, the hosts were switched to SKM 9000s, too.”

With the rehearsals starting almost four weeks before the finale, the Sennheiser RF team on site included eight RF wireless experts. “This enabled us to rotate the team members,” said Schmitt. “Actually, our team was almost as international as the song contest itself: one person from the Netherlands – who was a very happy guy after the finale – two Danish guys, one Brazilian, one Korean and three Germans. We were extremely pleased with the excellent cooperation within the entire production team, and in particular with the Agorà team.”
Wireless Sennheiser microphones at ESC 2019