The mountains are calling: If you are one of the growing tribe of passionate climbers that embraces the intense highs of the great outdoors, you’ll know the feeling. Even though the international climbing community is incredibly well-travelled, the Republic of Armenia remains largely uncharted territory. This small landlocked country, surrounded by Georgia, Azerbaijan, Iran and Turkey, is still viewed as a somewhat exotic travel destination with conflict-prone border regions that tourists should best steer clear of. Yet for an intrepid team of climbers, Armenia – a country of around three million people – offered a wealth of adventures that the team were able to capture on film. With help from sound equipment from Sennheiser, these seldom-seen heights will be shared as a documentary, which will bring the climbs and the country to the world. 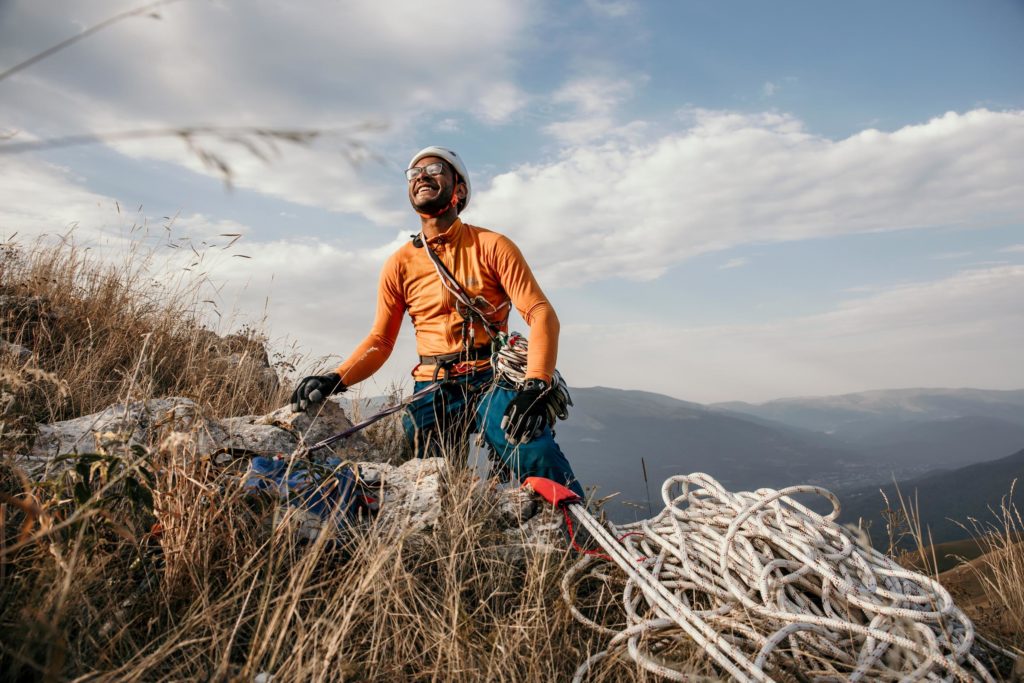 “Little Switzerland” in the Caucasus

In spite of the challenges of visiting the Republic of Armenia, in August 2019 a team of experienced mountaineers from Europe, Australia and Canada travelled to the country to spend two months discovering new routes for climbing fans – and to document their adventures for their community. Their destination was a rock formation approximately 15 km long near the town of Dilijan. Due to its beautiful surroundings, the region in the province of Tavush is fondly known as “Little Switzerland” by the locals.

During their stay, the team marked three sectors of the sandstone rocks, which rise up to 400 metres high and which have never been climbed by professionals. They named them “The Empress Slabs”, “Shady Water Gully” and “The Nest”, choosing these particular sectors because they meet all the requirements of a varied climbing experience. In total, the team defined 22 climbing routes, with grades of difficulty ranging from 5c to 8b according to the French grading system that’s popular with climbers. 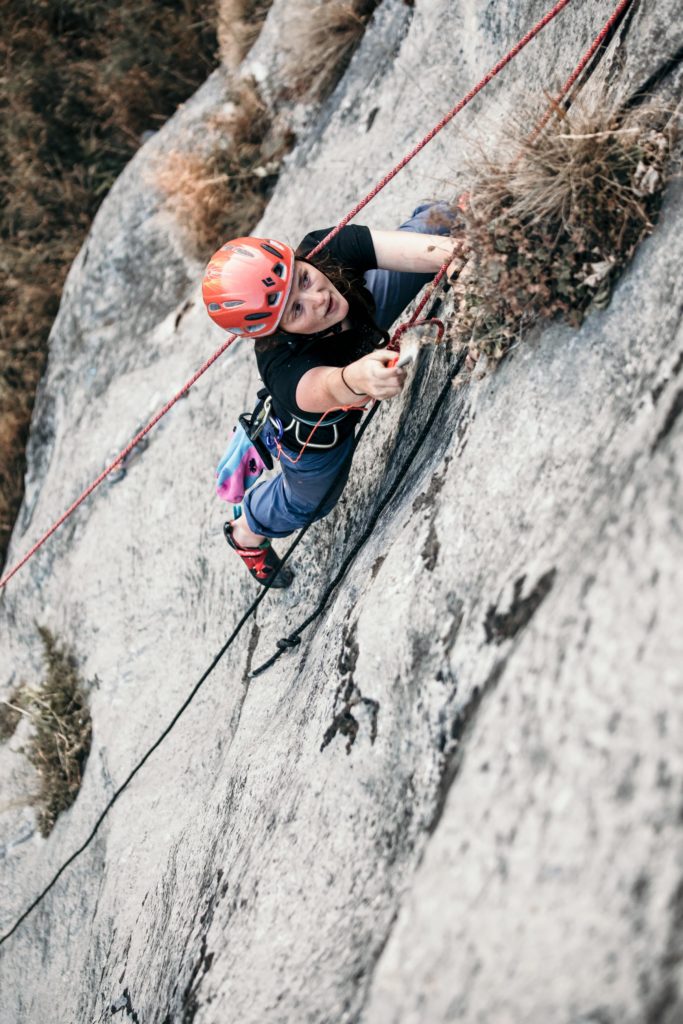 “Many climbers restrict themselves to routes that are already known – but personally, I take much more pleasure in exploring places that have so far been ignored,” says Aleksandra Wierzbowska. Together with a climbing partner, Wierzbowska was responsible for the audio-visual documentation of the project, which lasted for several weeks.

The key components of the equipment were DSLR cameras for photos and video recordings, a portable multi-track audio recorder and high-quality microphone equipment from Sennheiser – including high-performance wireless systems, wired shotgun microphones and headphones from the audio specialist. The video recordings were made in HD quality. The aim was to produce a 40-minute documentary that would not only be of interest to climbers, but that would also bring to life the country and its people.

In the A band on unknown territory

For their journey, Aleksandra Wierzbowska and her colleagues packed four evolution wireless ew 112P G4 wireless camera microphones. This robust all-in-one wireless system comes as a ready-to-use set including an SK 100 G4 bodypack transmitter, an EK 100 G4 portable receiver and an ME 2-II lavalier microphone, as well as a camera adapter and the necessary connecting cables. The set is ideally suited for the toughest of (outdoor) applications – just perfect for the sporting demands of the Caucasus climbers. Outdoor users can enjoy the benefits of reliable operation between -10 °C and +55 °C. The transmitters and receivers each weigh just 160 grams. 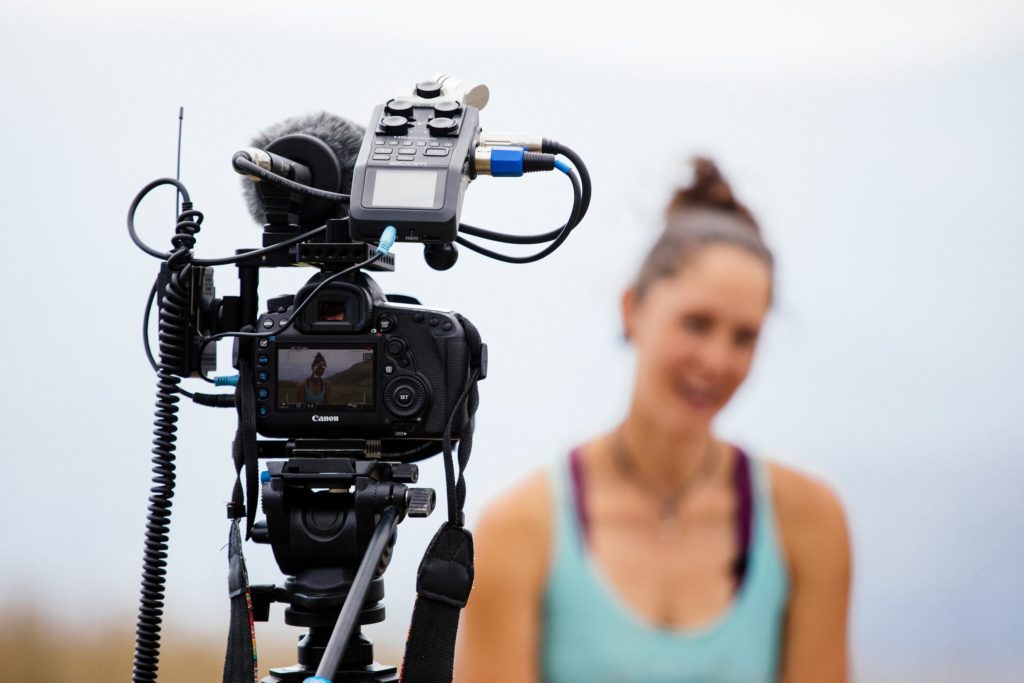 The evolution wireless ew 112P system was mainly used for interview situations:
Climber Kim is miked up with the ME 2-II lavalier, the EK 100 receiver is attached to the camera (left)

“We operated the wireless systems in Dilijan in the range around 525 MHz and there were no problems at all with the local authorities. Aplauz, the Polish Sennheiser partner, had advised us in advance to select the A band for use in Armenia,” Aleksandra Wierzbowska reports. “No unexpected interference occurred, although of course we weren’t in a big city but in a thinly populated rural region without much wireless traffic.” In spite of the extreme weather conditions at times, the Sennheiser wireless equipment was absolutely reliable, according to Aleksandra Wierzbowska. During particularly heavy downpours, the usual precautions were taken so as not to damage the audio-visual equipment.

The Sennheiser wireless systems were primarily used for interviews with the locals. The interview partners were professionally fitted with the ME 2-II microphones that were included in the sets. “During the wireless transmission, we never experienced any interruptions or undesired artefacts,” explains Aleksandra Wierzbowska. “The operating period of the transmitters and receivers with fully charged batteries was always more than sufficient.” 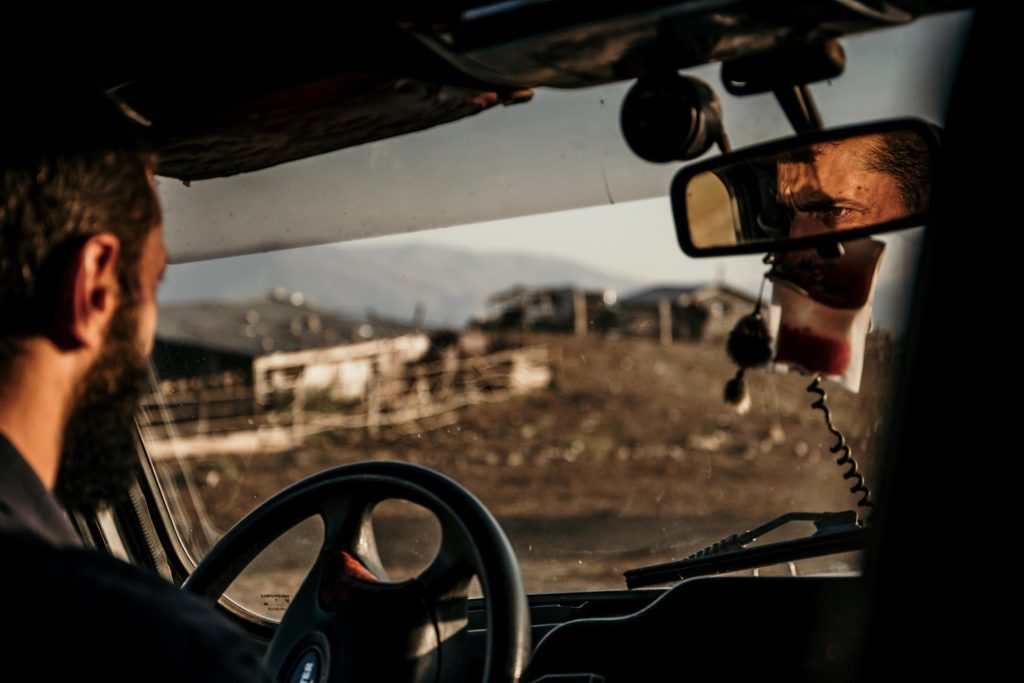 Aleksandra used the Sennheiser evolution wireless systems to capture locals, thus portraying
the country and its people in addition to the climbing routes

Targeted recordings with the Sennheiser MKE 600

For the audio recordings, the Sennheiser wireless systems were also supplemented by wired Sennheiser microphones, including two MKE 600. The battery- or phantom-powered MKE 600 shotgun microphone is ideally suited for use with a video camera or a DSLR/DSLM. The elastically suspended capsule ensures very good suppression of structure-borne noise, and a switchable low-cut filter does the job of effectively minimizing wind noise. Due to its high directivity (super-cardioid/lobar), the microphone can be targeted precisely at the sound source while attenuating noise from the sides and rear. 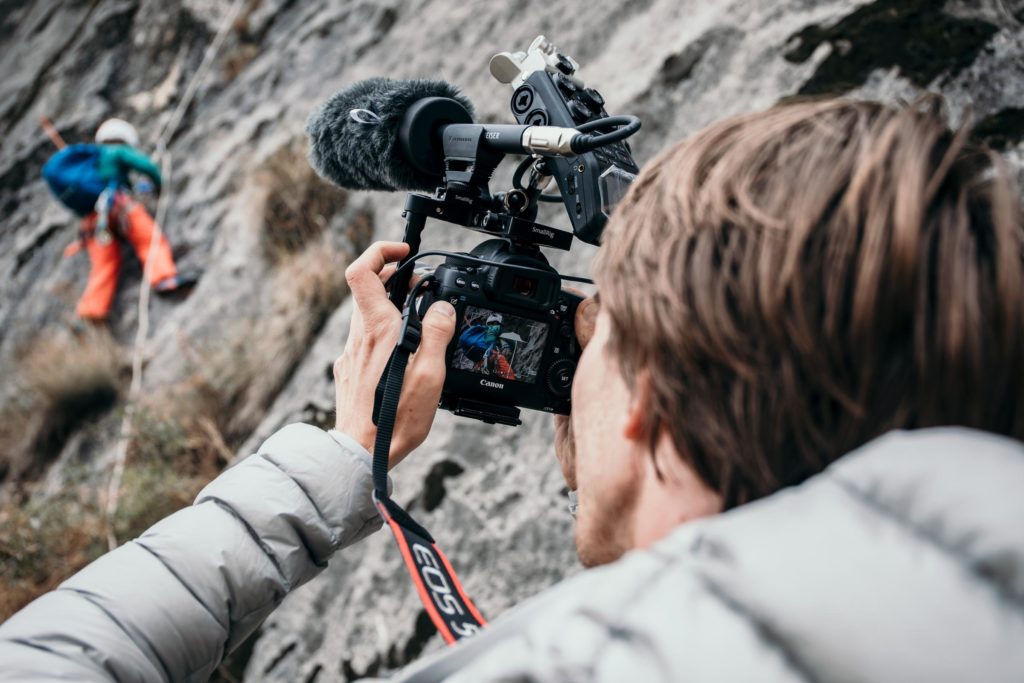 Besides interview situations, the MKE 600 shotgun microphone was used when filming the climbers on the cliff face

“We regularly used the MKE 600 in situations where we didn’t want to mike up our interview partners with an ME 2-II, but still wanted to clearly record what they said without any surrounding noise,” explains Aleksandra Wierzbowska. “Sometimes, we also employed the MKE 600 in scenes that we did with climbers high up on a cliff face – and, of course, the MZH 600 fur windshield always made sure that wind noise was kept to a minimum.”

The shoe mounts of the cameras were regularly fitted with a Sennheiser MKE 440. The MKE 440 is a compact stereo microphone consisting of two interconnected and perfectly matched mini-shotgun microphones in a V configuration. The two capsules acoustically cover an area corresponding to the recording angle of a 35 mm camera lens – ensuring homogeneous coverage of the entire area with particularly high speech intelligibility in the image focus.

“The MKE 440 is the perfect solution for recording sound atmospheres in optimum quality,” Aleksandra Wierzbowska confirms. “I usually used the MKE 440 for recording climbing action on the rock face. It was securely fixed on the camera’s shoe mount, with the microphone cable going directly to the audio input of the DSLR. On the other hand, I nearly always recorded the signals from the MKE 600 using the portable audio multi-track recorder.” 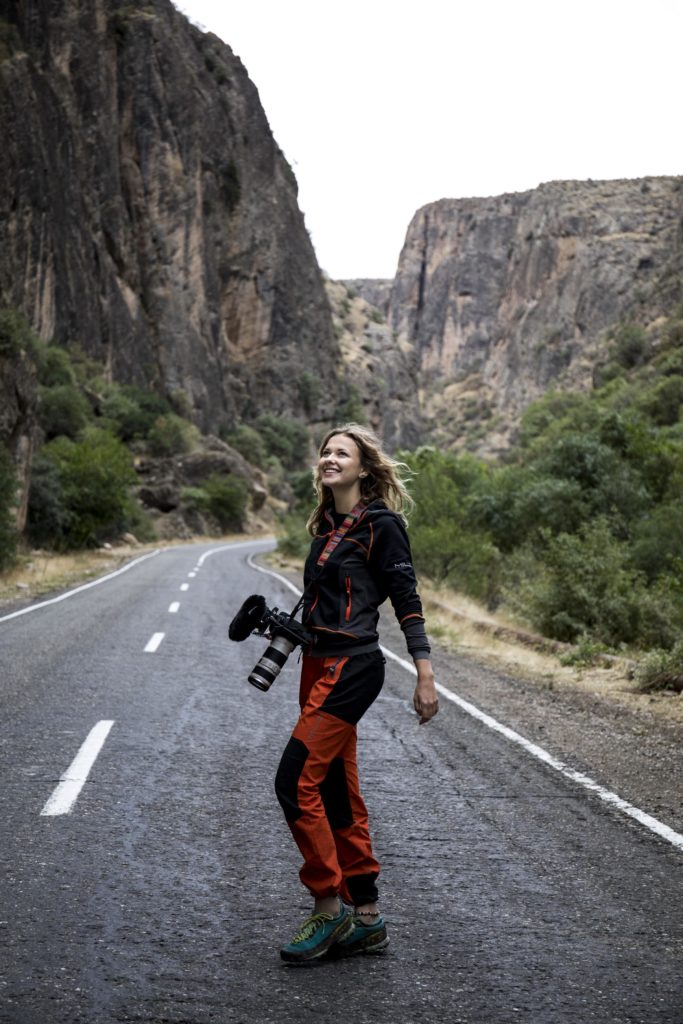 For acoustic monitoring of the recorded audio tracks, the team used Sennheiser HD 25 Plus headphones, which proved to be extremely useful for the project in Armenia. “Their closed design enabled us to reliably monitor the sound recordings even under the most challenging environmental conditions,” explained Aleksandra Wierzbowska. “It only became a bit more complicated when we were wearing our helmets at the rock face – although,” she adds with a smile, “one can hardly expect the developers at Sennheiser to predict such an unconventional job for their headphones, of course…”

Like many other events, the audio-visual documentation of the climbing project was put on hold by the coronavirus pandemic. “I’ve been in Iceland for some months now, even though I actually intended to start travelling some time ago,” says Aleksandra Wierzbowska. “As soon as it’s possible to enter Armenia again, I will set off back to Dilijan to round off the project with further video impressions and interviews and then go into the post-production phase. I hope that the documentary will be finished sometime in the spring of 2021. Various screenings are planned at events known in the climbing scene and the film will also be made available on popular online platforms. To be honest, at the moment I can hardly wait to get back to the region around Dilijan and to see my new friends again…”